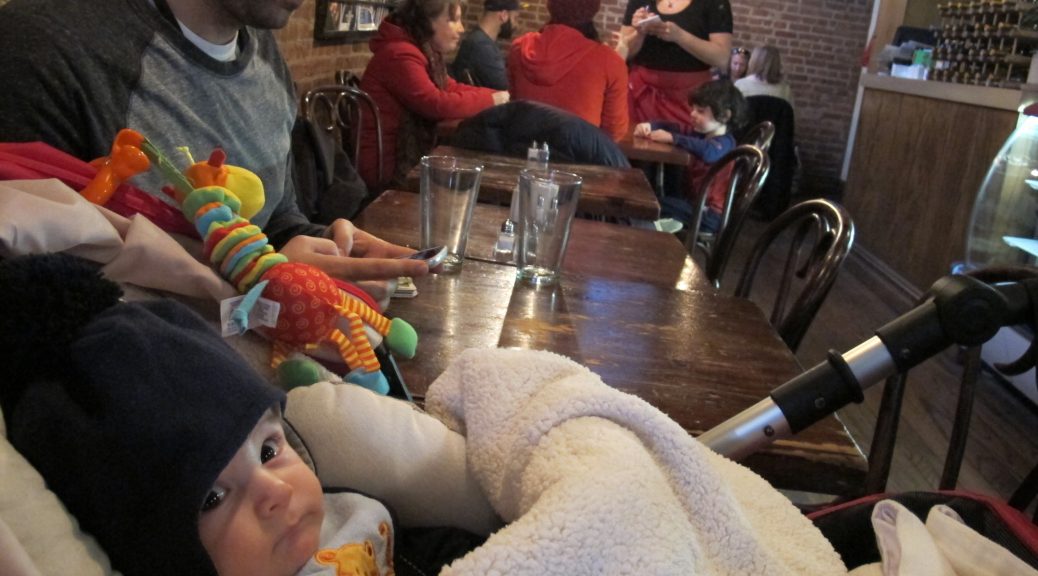 I suspect we are not alone in this,  not wanting our son, Monks, to become addicted and dependent on TV, phones and all the electronics that surrounds us these days.

To be honest, while I was pregnant, I never gave it much thought.  And, for the first few month, having the IPad within arms reach is probably one of the reasons I have not lost my mind, especially during those tough breastfeeding moments.  After a while, though, it became obvious to both of us how attractive these mysterious colorful and vibrant boxes are to a young baby.  Basically, when any piece of electronics is on, we can not keep Monks from staring at it.   Nothing takes his attention away from it until it is turned off.   Though, this makes for many easy photo shoots, it is not a habit that we wanted to instill in him at such a young age.

I always felt like I grew up watching too much TV and, in hindsight, I wish I would have been encouraged, actually, forced to do other things.

Monks at 4 months smiling for the camera Did I say I was worried about forming a bad habit?  Ha! That was the least of our problems.  Or, so it seams, from an article I read on Huffington Post thanks to my sister who shared it on facebook (I swear, sometimes I hate facebook).   The article was very interesting and also quite terrifying.  It simply stated this

I mean, I knew we would have to set some limits for him, but I did not realize it would be no exposure for the first two years of life. The Article goes on to list 10 reason why baby’s and children’s exposure to electronics should be avoided/severely limited.   The reasons include:

This is the most interesting bit of the article.  If you overstimulate the brain with cartoons and games, basically, it gets lazy.   It does not want to do the work of imagining things and coming up with new ideas.  I know i’m oversimplifying it, but that’s how I understand it.

Technology limits motions which is important for a growing child, This can result in developmental problems.   Who knew?  If you think about it for a second it makes perfect sense, but I had not.

This is pretty obvious.  If you don’t get out and get moving, you get big.  Got it!

I guess if you give a child a device, they will just keep using it until they pass out or the batteries die and/or the power goes out.

This is a bit of a stretch in my opinion, but I guess if you ignore a child and use a device as a babysitter constantly, they are bound to have some issues.

Sure, children mimic us and everything they see around them.  Show them violence depicted on a video game and they will mimic that too.  Eventually, it becomes normal behavior.

I get the basic concept.  Children who can’t pay attention can’t learn. It is a little too technical for me to describe here… talking about frontal cortex and such.  You should just google it for yourself.

This is more about the parents detaching from their children and leaving a void.  The children then fill this void with devices.  I can see how an addiction can develop as a result.  After all, that’s what addiction is all about,  trying to fill a void.

OK, I have been paranoid about exposing myself to cell phones and radio frequencies since I first got one 15 years ago.  Now, however,  I am terrified at what that exposure can do to a tiny developing brain.  Ugh!

Huh? Can someone please explain this to me?

All in all, though, really scary stuff!  So, we decided that we would do whatever it took to keep Monks away from electronics for the first two years of his life.  This is not the easiest of tasks when you are in someone else home and they have the TV going, but we have managed.   Many times, friends and family respect our decision and will turn off the TV.

I make it a point to not be on my phone or any device when I am with him  which is, pretty much, all the time.  This can be difficult especially when you are say… trying stay in touch with the outside world to keep your sanity or… trying to write a blog, for example.  Oh well, you have to choose your priorities in life, right? For obvious reasons, I don’t get much done when I am with Monks and that’s ok.  I realize, I am much more present when I have no electronics to distract me.   I can really spend quality time with him.  Taking in all the changes he is going through.  Witnessing all the magnificent feats he is accomplishing. Plus, I just don’t want to miss a minute of this amazing little guys life.